Are you concerned about the future of your nonprofit’s base of fundraising support? Do you like the idea of adding new donors who are wealthy and well-educated? Then you might consider adding a robust online ambassador program and social media strategy, because simply put, nothing adds more new, wealthy donors more quickly than a well-run online ambassador campaign.

BWF did a quick survey of seven very different higher education institutions who recently conducted mostly online or online-only fundraising campaigns. The sample size was small, but diverse – schools included major public research institutions, small liberal arts schools, an Ivy League member, an internationally-renowned private, a small state school, among others. Of those surveyed, the average percentage of new donors during an online campaign was 40 percent. And the outliers were subtle – the lowest school had 27 percent, the highest 58 percent. And we’re not talking about 40 percent of a few dozen donors – most of the schools counted their donors in the thousands during these campaigns. This is especially impressive considering most of the campaigns were 36 hours or shorter. 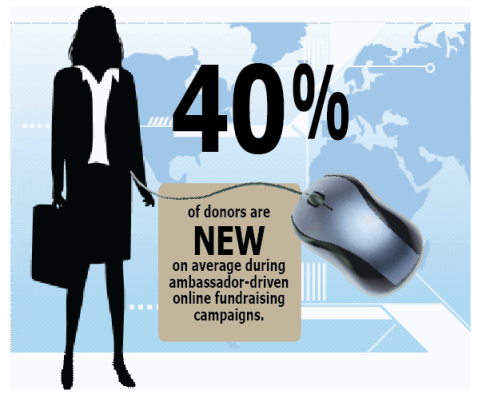 Who are these newly acquired online donors? On average, they’re far wealthier than their peers who chose to give through traditional means like direct mail. According to a recent Convio study referenced below, those who give both online and off have the highest household incomes, followed by those who give only online. The distant third and least wealthy group are those who only give via mail.

If you want the wealthiest donors, look online.

To create online campaigns that help your organization or institution leverage the above trends, consider increasing your effort and resources in the following three areas: